Available to order this summer, Vauxhall’s all-new, fifth generation Corsa has achieved a significant weight loss, with the new model weighing in from just 980kg. 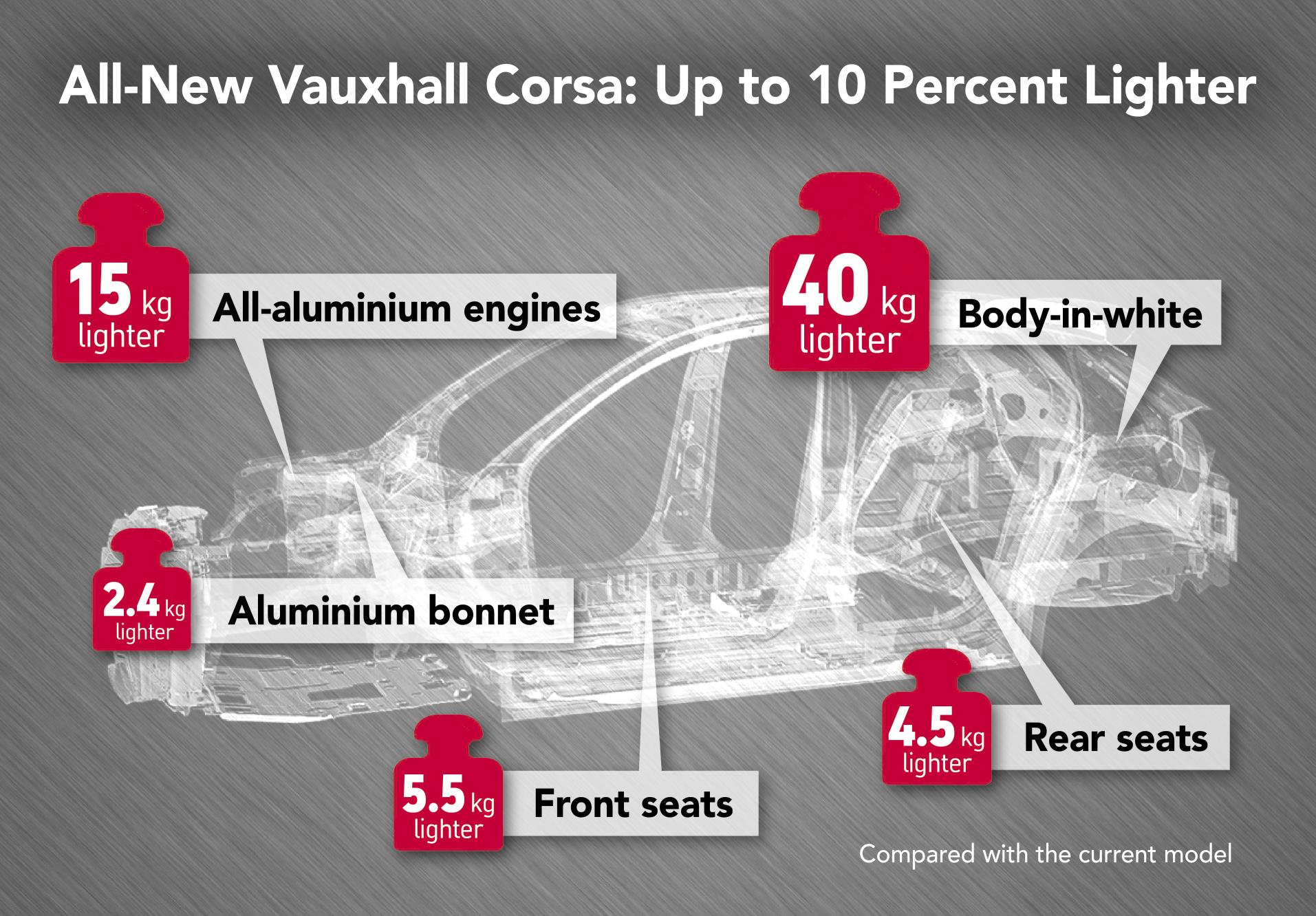 Thanks to its lightweight design, the new Corsa weighs up to 108kg less than the outgoing model. This means that every new Corsa benefits from improved performance and handling, and increased efficiency, whether it’s powered by an electric motor or conventional engine. Despite losing around ten per cent of its weight, the Corsa retains similar dimensions to the outgoing model at 4.06m.

Making its debut in 1993, the Corsa has been Vauxhall’s best-selling model for many years with over two-million sold in the UK and 13.6 million sold across Europe.

The light-weight design was created using the latest virtual development methods. The specific use of various steel grades and connection methods enabled the Corsa’s significant weight reduction. This includes the consistent use of high-strength and ultra-high-strength steels, as well as the optimisation of load paths, connections, structure and form. Compared with the previous model, the body-in-white is 40kg lighter.

The all-new Corsa is based on the new multi-energy platform for small and compact cars, which allows a variety of propulsion systems. So for the first time customers can opt to go fully electric with a Corsa BEV (Battery Electric Vehicle), or choose from a range of highly efficient petrol or diesel engines.

Contributing further to the weight loss, these engines are of all-aluminium construction. Of these, the compact three-cylinder petrol engines weigh around 15kg less than the previous generation of similarly powerful four-cylinder units.

The Corsa also features an aluminium bonnet (a rarity in its segment) that saves 2.4kg compared to the outgoing steel bonnet. The top-of-the-range Insignia was previously the only model in the Vauxhall range with an aluminium bonnet.

The seats have also been put on a diet with their new structures saving a total of 10kg: 5.5kg at the front, 4.5kg at the rear. A new lighter insulating material was also used in their construction.

These measures combined result in a weight reduction that, allied to optimum aerodynamics and the efficient powertrains, will lead to a considerable reduction in fuel consumption and CO2 emissions.

From Astra to Insignia: lightweight design strategically important to Vauxhall
Acceleration and braking benefit from every kilogram saved. Lightweight design is therefore strategically important to Vauxhall. The current Astra, which launched in 2015, set new standards in this respect. The 2016 “European Car of the Year” is up to 200kg lighter than its predecessor.

The Insignia flagship followed exactly the same initiative as the Astra. Once again, Vauxhall’s engineers’ main objective was efficiency. Thanks to optimised packaging and lightweight materials they could save up to 175kg on the Insignia Grand Sport compared with its predecessor – much to the benefit of dynamics and fuel consumption. Depending on powertrain and equipment, the current Insignia Sports Tourer weighs up to 200kg less than a similar model variant from the first generation. Finally, Grandland X is also designed for optimum efficiency and is one of the lightest cars in its class.
Top
Post Reply
1 post • Page 1 of 1